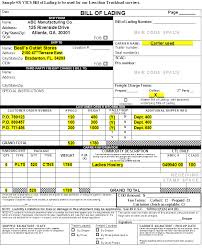 A Bill of Lading B/L is a document issued by the agent of a carrier to a shipper, signed by the captain, agent, or owner of a vessel, furnishing written evidence regarding receipt of the goods (cargo), the conditions on which transportation is made (contract of carriage), and the engagement to deliver goods at the prescribed port of destination to the lawful holder of the bill of lading.
A Bill of Lading is, therefore, both a receipt for merchandise and a contract to deliver it as freight. There are a number of different types of bills of lading and a number of regulations that relate to them as a group of documents.
Since this is a negotiable instrument, the Bill of Lading may be endorsed and transferred to a third party while the goods are in transit. This document is prepared by the shipping and addressed to the exporter, the shipping company trough the agent, and the importer.
Among other items of information, a bill of lading contains (1) consignor’s and consignee’s name, (2) names of the ports of departure and destination, (3) name of the vessel, (4) dates of departure and arrival, (5) itemized list of goods being transported with number of packages and kind of packaging, (6) marks and numbers on the packages, (7) weight and/or volume of the cargo, (8) freight rate and amount. It serves as a proof of ownership (title) of the cargo, and may be issued either in a negotiable or non-negotiable form. In negotiable form, it is commonly used in letter of credit transactions, and may be bought, sold, or traded; or used as security for borrowing money. A bill of lading is required in all claims for compensation for any damage, delay, or loss; and for the resolution of disputes regarding ownership of the cargo. The rights, responsibilities, and liabilities of the carrier and the shipper under a bill of lading