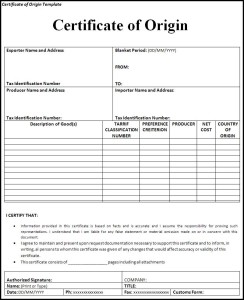 The Certificate of Origin certifies the country in which the goods originated or in which the preponderance of manufacturing or value was added. Also constitutes a declaration by the exporter. Virtually every country in the world considers the origin of imported goods when determining what duty will be assessed on the woods. Nevertheless the exporters own certification on company letterhead will suffice.

In the event the products were manufactured in two or more countries, origin is obtained in the country where the last substantial economically justified working or processing is carried out. As in the case of the cars parts have been manufactured in China, German, Australia. So the last manufacture place will issue the certificate of origin. In this case it will be Australia.

An often-used practice is that if more than 50% of the cost of producing the goods originates from one country, the “national content” is more than 50%, then, that country is acceptable as the country of origin.

In most countries, Chambers of Commerce are the key agent in the delivery of certificates or origin. However, in some countries, this privilege may also be extended to other entities such as ministries or customs authorities.