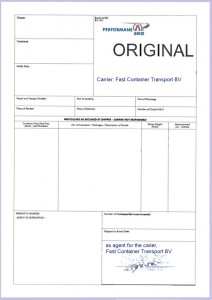 The letter of the Airfreight is also called as Airway bill. This is the document of the transport no negotiable that covers the transport in between of the two ports. Airport to airport

The Letter of the Air Freight must be named of the consignee (that could be a purchaser) o couldn’t be required to be issued “to the order” and to “endorsed” that now it is not made for the possession of the merchandize. Neither it isn’t the negotiable documents, nor it’s the evidence for the possession of the goods, with the certain control of the merchandize that aren’t paid in cash in advance. The seller usually achieves the letter of the Airfreight to their agent and transporter in the country of the client and purchaser.

The letter of the Air Freight isn’t the negotiable document. It’s only indicating the acceptation of the Goods for the transport.

There are several purposes that an air waybill serves, but its main functions are:
A. Contract of Carriage
• Behind every original of the Air Waybill are conditions of contract for carriage.
B. Evidence of Receipt of Goods
• When the shipper delivers goods to be forwarded, he will get a receipt. The receipt is proof that the shipment was handed over in good order and condition and also that the shipping instructions, as contained in the Shipper’s Letter of Instructions, are acceptable. After completion, an original copy of the air waybill is given to the shipper as evidence of the acceptance of goods and as proof of contract of carriage
C. Freight Bill
• The air waybill may be used as a bill or invoice together with supporting documents since it may indicate charges to be paid by the consignee, charges due to the agent or the carrier. An original copy of the air waybill is used for the carrier’s accounting
D. Certificate of Insurance
• The air waybill may also serve as evidence if the carrier is in a position to insure the shipment and is requested to do so by the shipper.
E. Customs Declaration
• Although customs authorities require various documents like a commercial invoice, packing list, etc. the air waybill too is proof of the freight amount billed for the goods carried and may be needed to be presented for customs clearance